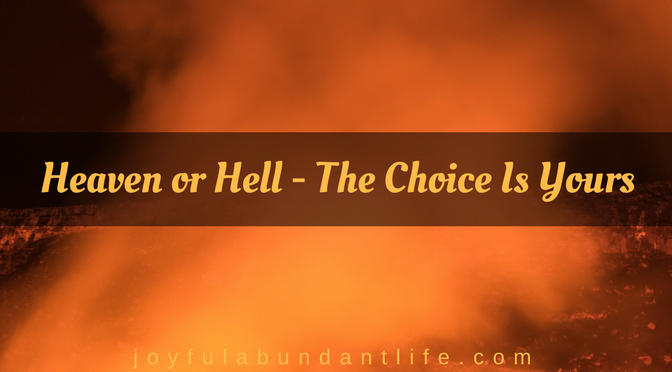 Heaven or Hell, the Choice is Yours!

Heaven or Hell, which would you choose?

My husband and I were looking at pictures of the volcano that took place in Mount Merapi, in Indonesia (this is a pretty good slide show of this volcano)  in October of 2010.

As I watched, I saw the immensity of the fire and smoke and was overwhelmed.  I was even shuddering, shuddering to think of all the people affected and lives that were lost and many who were fleeing for their lives.

Some people say they don’t believe in heaven or hell, but they are only fooling themselves; they are only believing a lie of the devil.  For hell has been prepared for the devil and his angels.  Sadly, there will be many others joining him there because they have not chosen to believe that Jesus died for their sins. 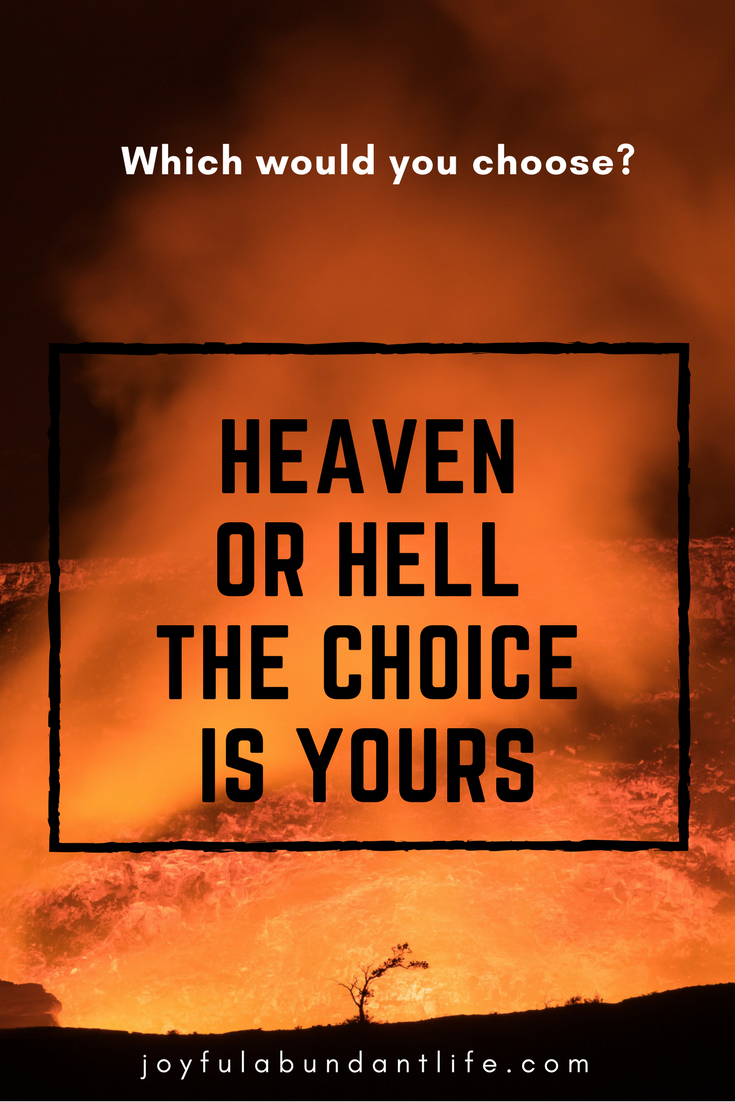 As I thought about everything, I was reminded about Hell.  Hell is a real place – a place where the fire is never quenched, a place of everlasting torment. The pictures of the volcano and the reality of it does not even compare with what hell will really be like.Time is short and I was convicted that the Gospel must get out before it is too late, before there is no more time.  What a loving and longsuffering God we have!

Psalms 9:17  The wicked shall be turned into hell, and all the nations that forget God.

Matthew 10:28  And fear not them which kill the body, but are not able to kill the soul: but rather fear him which is able to destroy both soul and body in hell.

Luke 16:19-31   There was a certain rich man, which was clothed in purple and fine linen, and fared sumptuously every day: And there was a certain beggar named Lazarus, which was laid at his gate, full of sores, And desiring to be fed with the crumbs which fell from the rich man’s table: moreover the dogs came and licked his sores. And it came to pass, that the beggar died, and was carried by the angels into Abraham’s bosom: the rich man also died, and was buried; And in hell he lift up his eyes, being in torments, and seeth Abraham afar off, and Lazarus in his bosom. And he cried and said, Father Abraham, have mercy on me, and send Lazarus, that he may dip the tip of his finger in water, and cool my tongue; for I am tormented in this flame. But Abraham said, Son, remember that thou in thy lifetime receivedst thy good things, and likewise Lazarus evil things: but now he is comforted, and thou art tormented. And beside all this, between us and you there is a great gulf fixed: so that they which would pass from hence to you cannot; neither can they pass to us, that would come from thence. Then he said, I pray thee therefore, father, that thou wouldest send him to my father’s house: For I have five brethren; that he may testify unto them, lest they also come into this place of torment. Abraham saith unto him, They have Moses and the prophets; let them hear them. And he said, Nay, father Abraham: but if one went unto them from the dead, they will repent. And he said unto him, If they hear not Moses and the prophets, neither will they be persuaded, though one rose from the dead.

Revelation 20:15  And whosoever was not found written in the book of life was cast into the lake of fire.

This may not sound like Biblical Encouragement, but my friend it is! IT IS!

What a blessing that we can know the grace of God.  It is the grace of God which gives us salvation through Christ.  It is nothing we can do in and of ourselves.  It is from God!   Oh how He loves us and what a special and awesome gift – the gift of Eternal life!

And oh what Grace that He would seek a lost sinner like myself and then interrupt my life and draw me to Himself so that I could see myself as a sinner unable to get to God on my own yet able to accept the free gift through faith in Him.

And oh what grace that He would continue to work in my heart to make me more like Him.  For when I am gloriously saved by the grace of God old things are passed away and all things are become new.  He puts a desire in my heart to be holy for He is holy.  His mercy is new every morning and His grace sustains me.  Won’t you accept His free gift today?  The choice is yours!

More Biblical Encouragement for You

There’s No Middle Of The Road