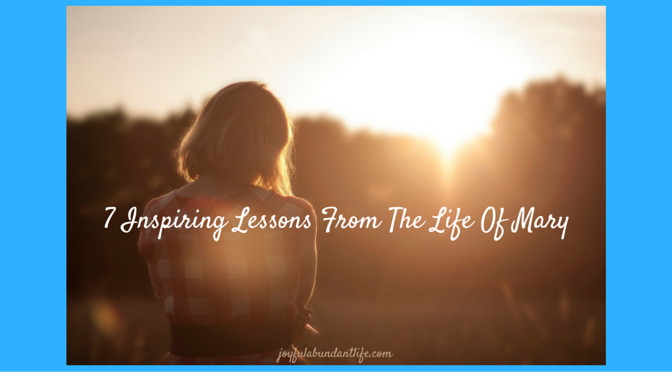 7 Inspiring Lessons from the Life of Mary

Mary, the mother of Jesus, is such a godly example

to all of us!  There are so many things we can learn from her life before the birth of Jesus.  It is obvious that Mary loved God with all her heart and desired to serve Him according to His will and not her own.

As I was studying Luke 1, I saw so many things in the life of Mary that I need to apply to my own life.

to love the Lord. 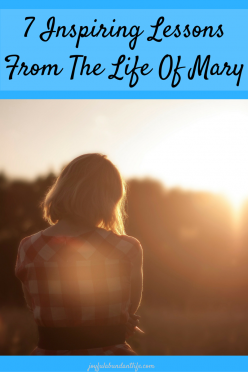 Mary, A Godly Example To All

1. Mary found favor with God. Luke 1:28 And the angel came in unto her, and said, Hail, thou that art highly favoured, the Lord is with thee: blessed art thou among women.

She was chosen to be the mother of the Messiah!  Mary had been obedient to the Lord throughout her life; the Lord knew her heart and He chose her.

There are other women that God chose to do certain things for Him – Deborah, Ruth, Esther, Elizabeth …

Perhaps the Lord has a special task for you to do.  Are you willing and obedient?

None of us deserve His favor, but He bestows unmerited favor on all of us by first of all giving His only Son to die for our sin.  It is for anyone who puts their trust in Him.  (Titus 2:11) For the grace of God hath appeared, bringing salvation to all men…  Not only did Mary avail herself of God’s grace through salvation, but she continued in obedience to Him, living a holy and obedient life to the Lord.

2. Mary questioned God out of her sincere belief in God.  Mary was told of Jesus birth by the angel Gabriel.  At first she was troubled and afraid.

Then she questioned this, These reactions were not out of rebellion, but out of her sincere belief in God. Luke 1:34 Then said Mary unto the angel, How shall this be, seeing I know not a man? Mary was a virgin so what would your reaction be!  Really!  I’m going to have a baby.  How can that be possible?  I’ve never had sexual relations with a man.  (And yes, this is how it ought to be outside of marriage. What a wonderful gift any woman can give her husband – her virginity.)

What is your attitude when God asks you to do something?  Are you rebellious or are your questions just because you need reassurance?  There is a difference.  It is OK to ask God questions if you are asking for the right reason.

3. Mary was given answers.  The Word of God reassured her.

Luke 1:37 For with God nothing shall be impossible.

4. Mary believed.  No matter how impossible this seemed, Mary still believed!  She believed that:

-her child would come from the Holy Spirit and would be The Son of God. v 35

-her cousin, Elizabeth had conceived in her old age when everyone thought she was   barren v 36

All in all, she believed that nothing is impossible with God!  From a human standpoint, none of these things could happen, but not with God!  v 37

-Let this happen according to God’s Will

-Mary didn’t question any more!  She trusted and obeyed!

Mary’s Excitement in fulfilling the Lord’s Will

Once Mary knew for sure what the Lord wanted, she was very excited.  It showed in her visit to Elizabeth and then in her praise to God.

6. Mary was also excited about her cousin Elizabeth and the news that she too had conceived.  Upon visiting Elizabeth it was obvious that Jesus was with her for his presence brought about these things: v39-44

-Filling of the Holy Spirit v41

-Humility – Elizabeth realized that that the Lord Himself was visiting her. V43

-Confession of Jesus being her Lord v43

-Blessing the Lord, Himself v42

7. Mary was humble and gave praise to God

-Rejoiced in God her Savior v47  *Note:  Mary is not the queen of heaven; she is     not sinless.  She too realized that she needed a Savior

-Praised Him for being mighty v49

-Praised Him for doing great things to her v49

-Praised Him for His Holiness v49

-Praised Him for His strong arm v51

-Praised Him for helping Israel because of His mercy just as He promised the   forefathers. v54

What an awesome example from Mary’s life

We can teach our daughters and granddaughters to follow her example.

Teach them to trust and obey, to be willing servants, to bless and encourage others in the Lord, to walk in the Spirit, to live holy lives, and  to taste of His goodness daily by spending alone time with God in His Word.

In general, teach them to love the Lord God with all their hearts, souls and minds and their neighbors as themselves.  Teach them to be excited about what God wants them to do and then just Trust and Obey!