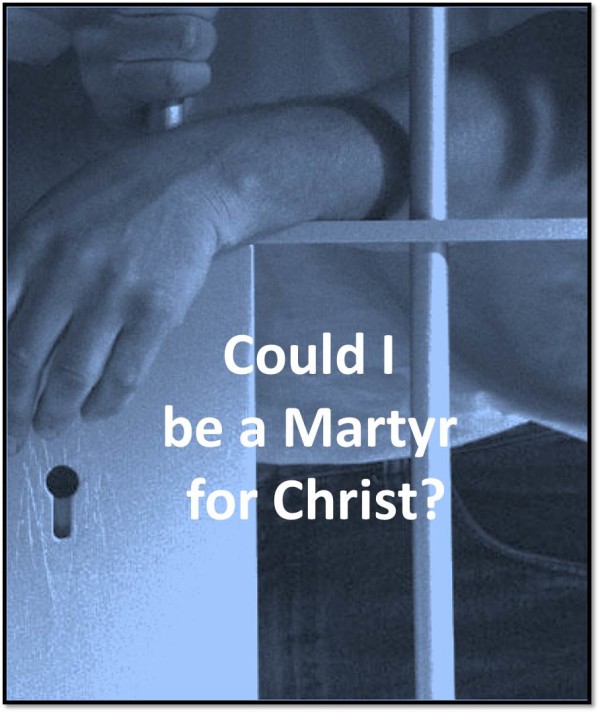 Could I Be a Martyr for Christ?

As things seem to worsen in our country and Christians are now under attack for their faith and beliefs, I have often asked myself this question:

Could I be a Martyr for Christ?

“Hebrews 11:36-38 And others had trial of cruel mockings and scourgings, yea, moreover of bonds and imprisonment: They were stoned, they were sawn asunder, were tempted, were slain with the sword: they wandered about in sheepskins and goatskins; being destitute, afflicted, tormented; (Of whom the world was not worthy:) they wandered in deserts, and in mountains, and in dens and caves of the earth.”

That is a tough question and one I don’t think I could really answer unless I was actually faced with that ultimatum.  What if today I had to take a stand for the truth and be willing to be a martyr for my faith? 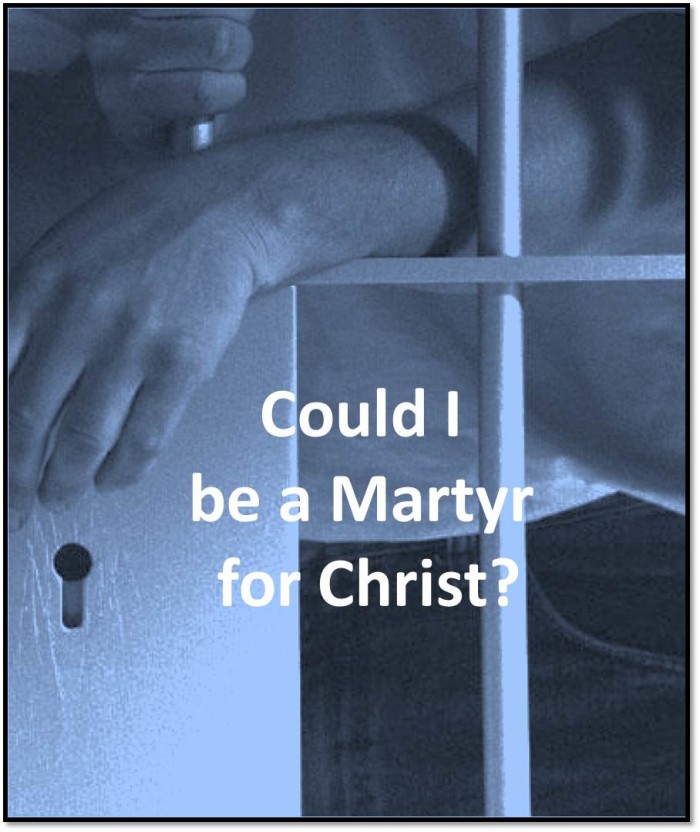 Over the years I have read many books about Christians who were martyrs for their faith and suffered greatly for the cause of Christ. There were many during the Jewish holocaust who stood for their faith.  Some, such as Corrie Ten Boom and her family hid the Jews, and went to concentration camps for this very reason. She miraculously survived and could tell her story. She has many famous quotes one of which is:

“There are no ‘ifs’ in God’s Kingdom. His timing is perfect. His will is our hiding place. Lord Jesus, keep me in Your will! Don’t let me go mad by poking about outside it.”

That is quite a statement! I wonder if I would say that if faced with death for my faith.

I’ve read about others such as Rose Warmer; she had a faith which transformed her life.  Her shone brightly in the concentration camps where people who despised her for being a Jew because she believed in Jesus, but they were drawn to her over and over in order to drink from the wellsprings of faith and hope which sustained her.

There was also Anita Dittman, a Jewish girl who came to know Jesus as her Savior at 8 years of age.  She also endured such great hardness during this time, yet continued to stand for their faith.  Anita tells of her  miraculously survival during the terror of Hitler’s reign when she was becoming a teen.

During the holocaust Jews were murdered by the thousands; Actually, there were nearly 6 million Jews killed.  (Source)

Then there were missionaries such as Jim Elliot and his team who gave their life for the cause of Christ.   He was Christian missionary to Ecuador who, along with four others, was killed as they worked on evangelizing the Waodani people.  One of his famous quotes is:

These martyrs mentioned are just a few of the thousands!

I pray the Lord will make me strong if that day ever comes. The Bible does say:

2 Timothy 3:12 Yea, and all that will live godly in Christ Jesus shall suffer persecution.

And there are many modern day Christians who have been willing to give their lives.

This is a  modern day example of Maryam Rostampour and Marziyeh Amirizadeh:  These two young women were arrested and held in the  Evin Prison in Tehran – here there were routine tortures and often sudden executions.

These are just a spec of multitudes of stories regarding Christians who were willing to stand for their faith in Jesus Christ.

I like to read/hear stories regarding those who are willing to give their all for Jesus. Why?

1. It makes me thankful.

I have had SO MUCH and often take it for granted. To whom much is given, much shall be required.

2. It makes me realize that our life is a vapor that appears for a little while and then vanishes away.

Because of this I need to focus on what is important in life – mainly that of serving my Lord and Savior whole heartedly.

3. It reinforces to me that I need to teach my children and grandchildren diligently the Truths of God’s Word.

4. It reminds me that my heart is desperately wicked and who can know it?

Only God knows our hearts. Friend, we are desperately wicked and are in need of a Savior. That is why there is so much suffering and persecution. SIN! And without a Savior there is no hope.

5. It shows me that God’s Word can never be destroyed!

Suffering and persecution is what has caused God’s Truth to go forth even more and as a result many have come to know the Lord Jesus as their Savior.

6. It makes it more real that the time may come for me to have to stand for the Truth no matter what it may cost.

Can I?  By the grace of God only – Romans 8:31 What shall we then say to these things? If God be for us, who can be against us?

7. It also reminds me that this world is NOT my home.

I need to set my affection on things above – my forever home will be in heaven with my Lord and Savior where no one can kill the soul. They can kill our bodies here, but not our souls – Do You know Him!

Killing Christians – such a sobering thought.

I have been reading a book entitled, Killing Christians, by Tom Doyle.  Friends, this book is about modern day believers who suffer for their faith! It is real! It is happening! And it is being seen to some degree even in America!  If you keep up with the news at all, you know it is happening! 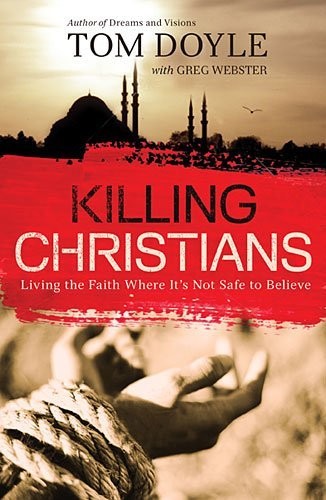 Are we ready for it?

Would we die for our faith?

Would you be willing to put your life on the line, maybe meeting in secret church meetings, or as one man did:  hiding under dead bodies in caskets in order to smuggle Bibles to other Christians?  What about being tortured or sent to prison on charges of being a Christian?

There are Christians around the world doing so right now. Why?

Could we be like Stephen, the first martyr in the Bible, who saw Jesus standing on the right hand of God and was able to say (Acts 7:60 . . . Lord, lay not this sin to their charge.)?  And when he had said this, he fell asleep. – He was willing to die for his faith no matter what the cost!

His greatest desire was not for his personal well being but for others to know Jesus.

First of all are you ready for eternity?  And if so, are you willing to stand for the Truth no matter the cost?

Disclosure: I was provided with a gift certificate from Family Christian and a copy of the above book as compensation for this post.  All opinions and ideas are 100% my own.  There is a full disclosure here.

Shop The Daily Grace Co. For That Perfect Gift 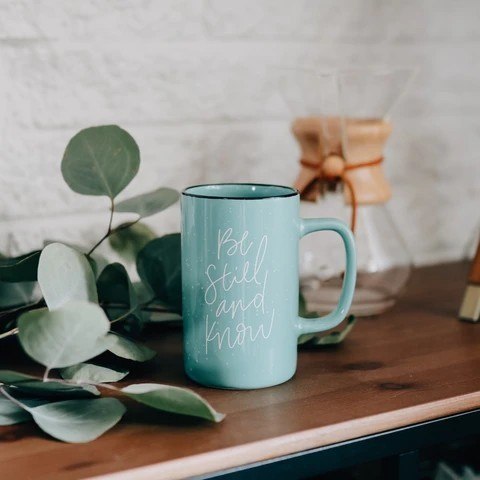 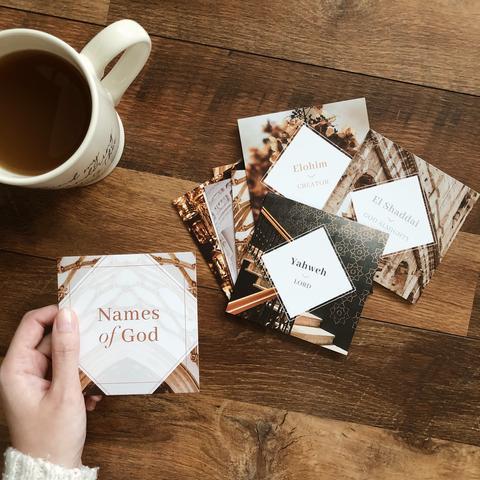 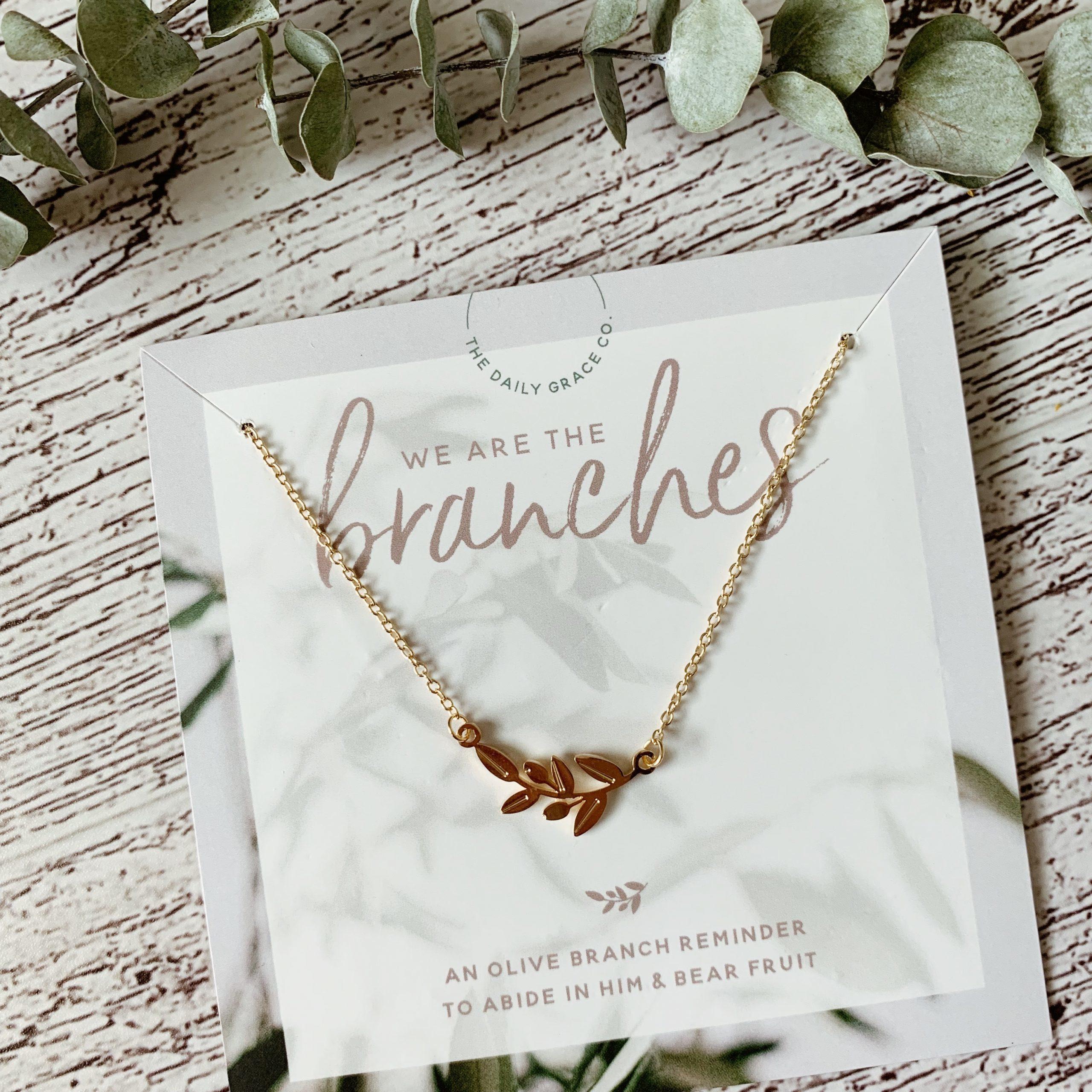 Thanksgiving and Praise to God – I Am Beloved of God

“He is no fool who gives what he cannot keep to gain what he cannot lose.”
Love this quote! With all the things happening in the world right now, I can’t help but think about people being martyred. It’s heartbreaking but at the same time, I admire their faith in the face of death. I just heard a man on the radio yesterday talking about witnessing a priest being hanged. He said he had never seen someone with such faith and peace in his life. I like to think that Jesus is right there next to them as they are persecuted. And like yo said, all that makes me realize how lucky I am to live where I can worship without fear. That is something we definitely express to our kids.

Yes, I too admire those who are able to stand for the truth in great times of testing. I can only hope and trust God that He will give me the grace to do the same should that day every come. Until then, I am reminded to pray continually for those who are willing to give their lives so that the gospel might go forth. Thanks for coming by and sharing your thoughts.

We don’t often think of modern day martyrs do we? After all, we live America, land of tolerance and freedom. But every day people are facing death because they are standing up for Christ. The world is not my home, indeed. Thank you for the reminder.

This world is not my home is something I need to remind myself of frequently. Glad you were able to stop by. Thanks for sharing your thoughts.