Did you ever think about the fact that it was God who sent Joseph to Egypt?

This fact just struck me this morning while I was reading in Psalm 105. It was God who sent Joseph to Egypt.  We always say that Joseph’s brothers sold him and they did, but it was actually God who sent him.

Psalms 105:17 He sent a man before them, even Joseph, who was sold for a servant:

Genesis 45:5 Now therefore be not grieved, nor angry with yourselves, that ye sold me hither: for God did send me before you to preserve life.

This is not exactly how one would choose for himself to be sent, but it was God’s plan. God can take the wickedness of man and use it for His good.  Incidents like this make Romans 8:28-29 a reality. 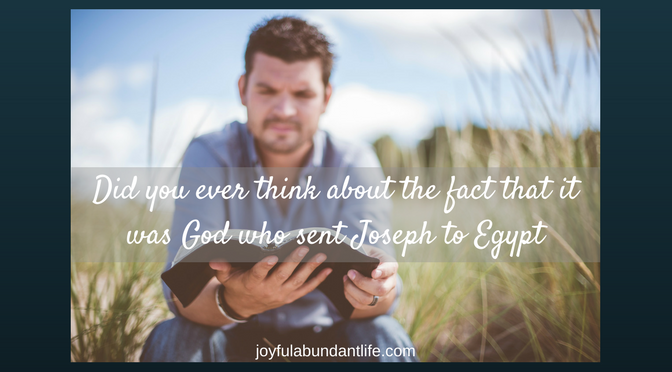 Photo by Ben White on Unsplash

Psalms 105:18-19 Whose feet they hurt with fetters: he was laid in iron: Until the time that his word came: the word of the LORD tried him.

Not only did God send him, but then he tried him.

Wow!  He really put Joseph to the test! I have to ask myself the question, could I endure such testing!  Look at what he went through.

When it was time, God exalted his humble servant:

1 Peter 5:6 Humble yourselves therefore under the mighty hand of God, that he may exalt you in due time:

Yes, God meant it all for good

Think of it.  Things happening in your own life may be wrong toward you, may be unfair, may be downright ugly, but it is certain that God has a purpose.

When we love and obey Him and humble ourselves before him, He gives us grace to go through the trials and tests.  He uses it for the good of others as well as to conform us more to His image.

God may send you somewhere where you are put to the ultimate test, where is seems impossible to see any fruit.  Yet, He is with you using it for His glory and possibly using you to save the lives of many.

When Jesus was on earth, He was definitely put to the test.  He was abused and done wrong more than any man on the earth.  The perfect Son of God was cruelly murdered for the sake of others.  As God sent Joseph,  God sent His only Son

, (Aff link)  that many lives could be saved.

I have had a situation recently that brought to mind Joseph’s words to his brothers: You meant it for evil, but God meant it for good. I’m depending on God for good.

Amen! If we’d just remember that all things work together for good to those who love the Lord and the reason is that we might become more like Him!

I love this story of Joseph in Scripture. It is so encouraging to know that God uses all things for our good as you mention in the article. God will send us ahead to be a blessing for others if we would only be obedient!

Amen! How I need to trust in the Lord with all my heart and not look to my own understanding.

Thank you so much for writing this! God has been very patient with me, but I am finally learning these lessons. Through hardships He has enabled me to see blessings. Now I have a small Sunday school class teaching Christ to men who come out of our local jail. Never saw that coming!

So awesome Jason! Thank you for your testimony and for submitting to the Lord. What a blessing to see Him work in ways unexpected. I have prayed for you and your precious family numerous times. God is good.

Thank you dear for your encouraging message. But some times it is very hard to digest the new route god is directing in a new way. since I lost my loving wife and elder son in an accident a couple of months ago. so thank you once again for your encouraging words. cause I decided to travel continuously in doing His youth ministry through youth for christ.

I am so very sorry for your loss. I cannot even imagine how hard that must be. Thank you for your willingness to keep trusting even while grieving. I will be praying for you during this trying time and as you continue in the Lord’s service and for many souls to come to Him. Youth for Christ events were times that I made many decisions for the Lord when I was young.