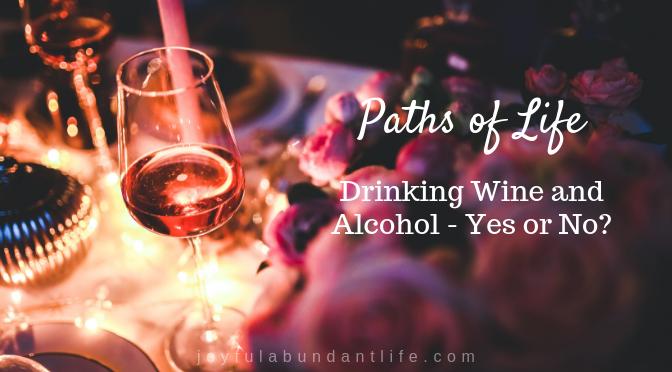 Drinking Wine and Alcohol – Yes or No?

I’m really not a fan of writing on this subject, but lately the sin of drunkenness has come up in my devotional time and I felt compelled to put a few things here.  For the most part I am sharing what I’ve found on other sites that relay my beliefs on the subject.

My prayer for my children and grandchildren is that they will abstain from these sins and from any appearance of evil.  And if you believe that drinking socially is OK, just remember that you may be a great stumbling block to the weaker brother. (Romans 14) 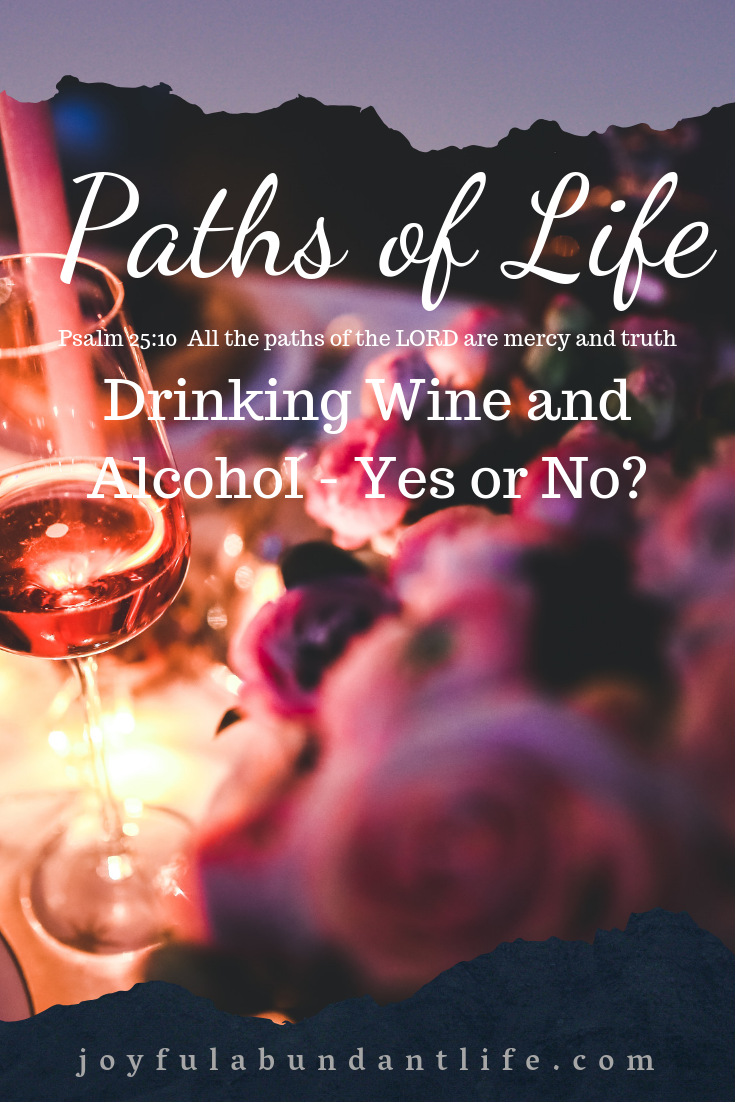 The article below from John G. Paton is one of the best that I’ve seen in reinforcing my own beliefs.  This article was found here on Wholesome Words.

Notice:  There are affiliate links associated with this post – Disclosure Here

Great good resulted from this Total Abstinence work [in Glasgow, Scotland, City Mission]. Many adults took and kept the pledge, thereby greatly increasing the comfort and happiness of their homes. Many were led to attend the church on the Lord’s Day, who had formerly spent it in rioting and drinking. But, above all, it trained the young to fear the very name of intoxicating drink, and to hate and keep far away from everything that led to intemperance. From observation, at an early age I became convinced that mere Temperance Societies were a failure, and that Total Abstinence, by the grace of God, was the only sure preventive as well as remedy. What was temperance in one man was drunkenness in another; and all the drunkards came, not from those who practised total abstinence, but from those who practised or tried to practise temperance. I had seen temperance men drinking wine in the presence of others who drank to excess, and never could see how they felt clear of blame; and I had known ministers and others, once strong temperance advocates, fall through their “moderation,” and become drunkards. Therefore it has all my life appeared to me beyond dispute, in reference to intoxicants of every kind, that the only rational temperance is total abstinence from them as beverages, and the use of them only as drugs, and then only with extreme caution, as they are deceptive and deleterious poisons of the most debasing and demoralizing kind. I found also, that when I tried to reclaim a drunkard, or caution any one as to intemperate habits, one of the first questions was,—

“Are you a pledged Abstainer yourself?”

By being enabled to reply decidedly, “Yes, I am,” the mouth of the objector was closed; and that gave me a hundred-fold more influence with him than if I had had to confess that I was only “temperate.” For the good of others, and for the increase of their personal influence as the servants of Christ, I would plead with every Minister and Missionary, every office-bearer and Sabbath-school teacher, every one who wishes to work for the Lord Jesus in the family, the Church, and the world, to be a Total Abstainer from all intoxicating drinks.

That’s powerful, don’t you think?  Abstain and it gives you much more influence that if you were only temperate.  Who knows but it may lead a soul to Christ.

Robert  Jones also has some good advice in his book “Gleanings from Proverbs”  Here is what He says: (Robert Jones. GLEANINGS IN PROVERBS (Kindle Locations 6402-6425). FirstLove Publications. Kindle Edition.)

“Who hath woe?  who hath sorrow?  who hath contentions?  who hath babbling?  who hath wounds without cause?  who hath redness of eyes?  They that tarry long at the wine; they that go to seek mixed wine.” (Proverbs 23:29,30) Both Old and New Testament scriptures abound with references to wine.  Not all these references condemn drinking of wine or command total abstinence, as for instance, Numbers 28:7 which speaks of “strong wine to be poured unto the LORD for a drink offering.”  And Paul commanded Timothy, “Drink no longer water, but use a little wine for thy stomach’s sake and thine often infirmities.” (I Tim. 5:23).  But warning passages against excessive drinking such as our text are many, and drunkenness is included in the list of soul-damning works of the flesh of which the Apostle declares, “that they which do such things shall not inherit the kingdom of God.” (Gal. 5:21). The doleful state of the drunkard is set before the reader of the text.

He is said to have woe.

Men may call something woeful because of its unpleasant or troublesome nature, but when God pronounces a woe, it is a fearful judgment, as in Deuteronomy 29:19,20: “And it come to pass, when he heareth the words of this curse, that he bless himself in his heart, saying, I shall have peace, though I walk in the imagination of mine heart, to add drunkenness to thirst:  The LORD will not spare him, but then the anger of the LORD and his jealousy shall smoke against that man, and all the curses that are written in this book shall lie upon him, and the LORD shall blot out his name from under heaven.”

The drunkard also has sorrow.

A drunkard also has contentions.

Isaiah 5:22,23 describes the nature of these: “Woe unto them that are mighty to drink wine, and men of strength to mingle strong drink:  Which justify the wicked for reward, and take away the righteousness of the righteous from him!”  The man in love with his liquor will be at variance with his fellowmen for it is the master he serves, not sound reason and good judgment which promote peace and stability in the world.

He will have babbling.

I Peter 4:3 reminds Christians: “For the time past of our lives may suffice us to have wrought the will of the Gentiles, when we walked in lasciviousness, lusts, excess of wine, revelings, banquetings, and abominable idolatries:”  Such activities are only full of foolish, empty, vile, and devilish talking.

Finally, the drunkard has wounds without cause and redness of eyes.

Matthew Henry, commenting on this said,

“The wounds which men receive in defense of their country and its just rights are their honour; but wounds without cause, received in the service of their lusts, are marks of their infamy.”  This service grows from hours to days to years to a lifetime and an eternal soul that is lost.  Beware the beginning of such folly. -M.Henry

Would it not be better to focus on this?

Ephesians 5:18-19 And be not drunk with wine, wherein is excess; but be filled with the Spirit;  Speaking to yourselves in psalms and hymns and spiritual songs, singing and making melody in your heart to the Lord

I hope you will take time to study God’s Word for yourself and be wise regarding this subject.  Don’t argue on your own feelings but on a total study of what God’s Word says.  Is your conscience clear as you stand before Almighty God? 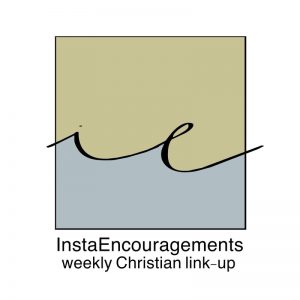 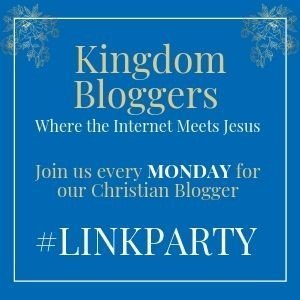 Great post Ellen! Such a touchy subject these days. I know when Thing 4 was looking for her Prince Charming it was next to impossible to find a “Christian” guy who didn’t drink. She held out of God’s best and we are so happy she did!

Thanks for linking up at InstaEncouragements!

Oh, I know that thrilled your heart that she waited! I’m glad for her, for you, and for the grandchildren.

I grew up in total abstinance. When i joined Wycliffe in my 20’s I found out that God wasn’t Baptist! (: And that many believers imbibed and that freedom in Christ meant just that. Just last evening I hosted what I call a wine night. Ten gals came – I didn’t invite my friends who don’t drink wine. At least two are unchurched and as we talked around the circle of how God was leading us, I knew God was glorified, that these gals were hearing women like them speak of a deep relationship with a God they can know, and they all want to come back in October. Wine nights aren’t for everyone. But it’s been a beautiful thing.

Thank you for stopping by and for sharing your views. As I mentioned we so desperately need to be careful that we do not offend the weaker brother (Rom. 14) and that our views are totally in line with God’s Word, not just our own feelings. I hope you read what John Paton said about being temperate. Our choices and how we communicate our perspective might impact others in the wrong way. We have a responsibility to make sure our behavior in every area of life is done to esteem others better than ourselves. (Phil. 2:3-4) And I don’t attend a Baptist Church either.