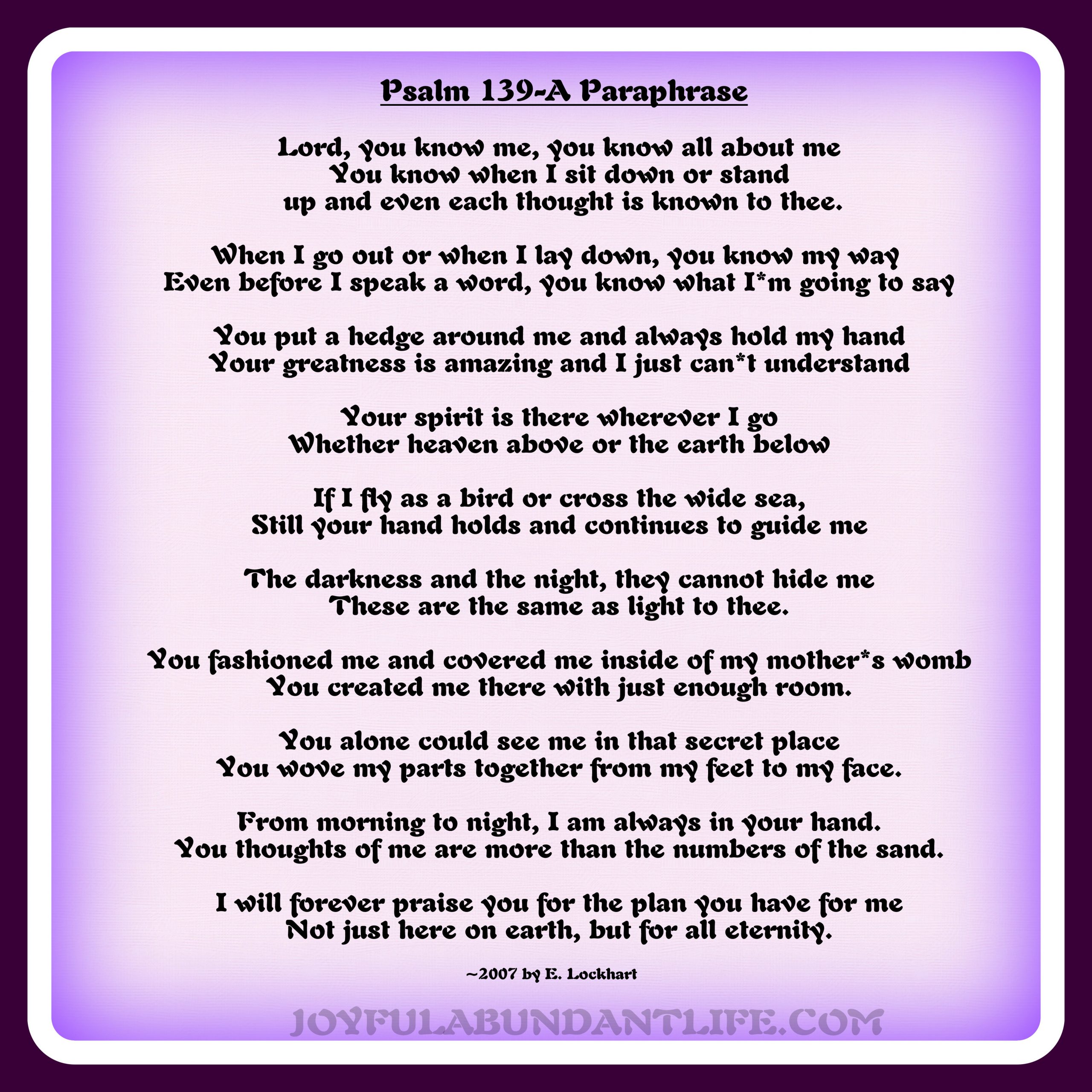 Fearfully and Wonderfully Made

Psalms 139:14 I will praise thee; for I am fearfully and wonderfully made: marvellous are thy works; and that my soul knoweth right well.

Sanctity of Life Day is this month

But God hath chosen the foolish things of the world to confound the wise; and God hath chosen the weak things of the world to confound the things which are mighty; I Corinthians 1:27
Below is a copy of an email that a friend of mine received recently from a friend. Her husband is currently the director of the Pregnancy Resource Center in Shelby, NC.

Here is the letter:

I’ve been led to tell you this story. I know you work with women who find themselves in an unplanned pregnancy. But I can certainly see the potential of someone who may not have the faith and support system to seek out your center for guidance, if they were given difficult news about the baby they were carrying by doctors.

My friend came to me in July, asking me to pray for her son, daughter-in-law and the baby her DIL was carrying. At 20 weeks, her DIL had an ultrasound and they were given the news that there was no amniotic fluid, which meant the baby’s lungs would not develop. Since there was nothing they could do and the baby would die at birth, it was recommended to them that they terminate the pregnancy, which they would not do. The following month, they saw a specialist and were given the same news and the same recommendation. Again, they refused to terminate, standing firm in their faith in God and his plan and will for their lives. At the beginning of October, to the dr.’s surprise, the baby was measuring what she was supposed to be measuring, but again the expectation for survival after birth was not there and they were told there wasn’t a thing the dr.’s could do for the baby. A week later, the baby was born, 2 months premature. This was October 11. After birth, the baby was life flighted to the NICU at Pitt Memorial hospital. The first couple of weeks were tough and the baby experienced a leak in her lung twice, which all the dr.’s could do was “wait and see.” Nothing could be done. After two weeks, the baby opened her eyes and her parents got to hold her for the first time. I got an email today from my friend and she said that they are weaning the baby off of the oxygen, the lungs continue to develop and not only is the baby receiving milk via a tube but she breastfed twice. The parents are now making preparations to BRING HER HOME! They did not prepare a nursery for her so they have a lot to do and are so excited! It’s amazing what God’s healing hands can do!

This is absolutely NOTHING short of a miracle. It has filled me to the brim with faith and I just have to share this with everyone. So please tell this story to whomever you feel is appropriate to tell. This little girl and her story has done so much to strengthen my faith and I know it will do the same for so many more people. God has such big plans for her….I can just feel it!

Wow!  what a story!  We have much to be thankful for!  Our God is great! 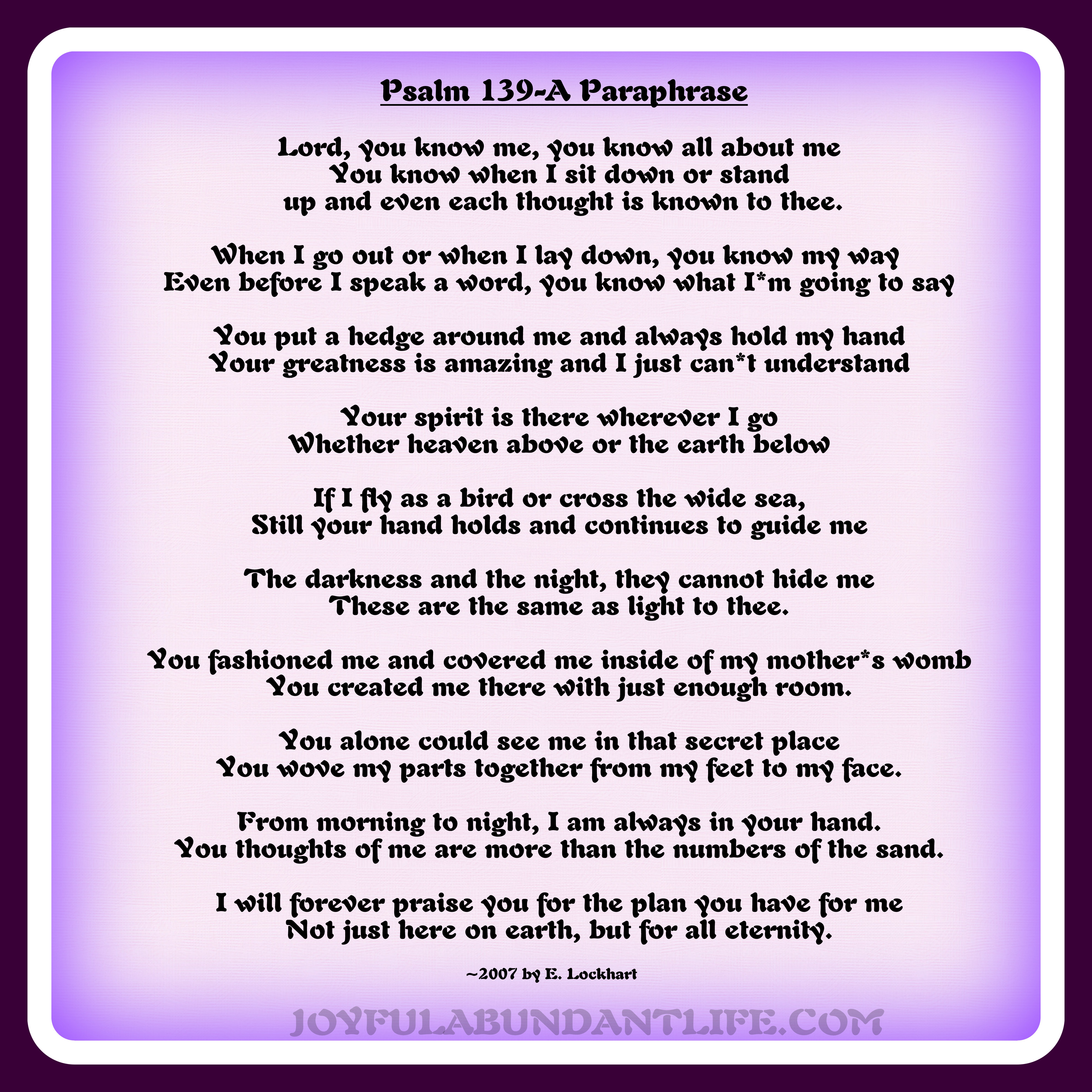 Would you consider abortion in the following situations?

The Souls of Hindered Children Cry for Judgment to be Passed

I’ve heard many of these wonderful stories of babies surviving when he parents had been told to abort them. Thanks for sharing this one.
I love Psalm 139!