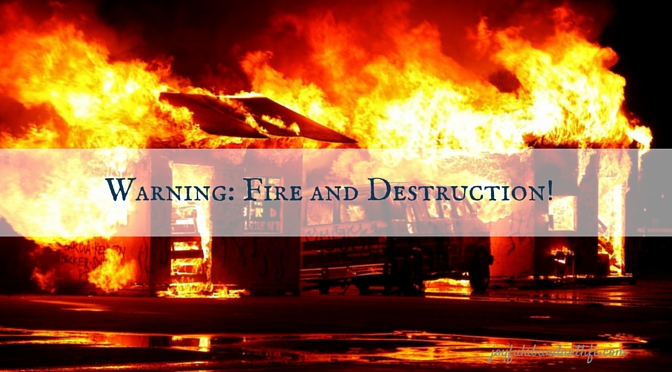 There was a fire at our house two days ago!  It took us quite by surprise!  We are grateful that is was an outbuilding that burned and not our house with us inside.

We went to bed that night thinking all was well.  We didn’t know that we were wrong.  About 1 am I subconsciously heard a car zoom up our driveway and blast on his horn.  I thought ” what in the world?”  Then before we knew it, there was loud urgent repetitive knocking at our door.  That woke both of us. 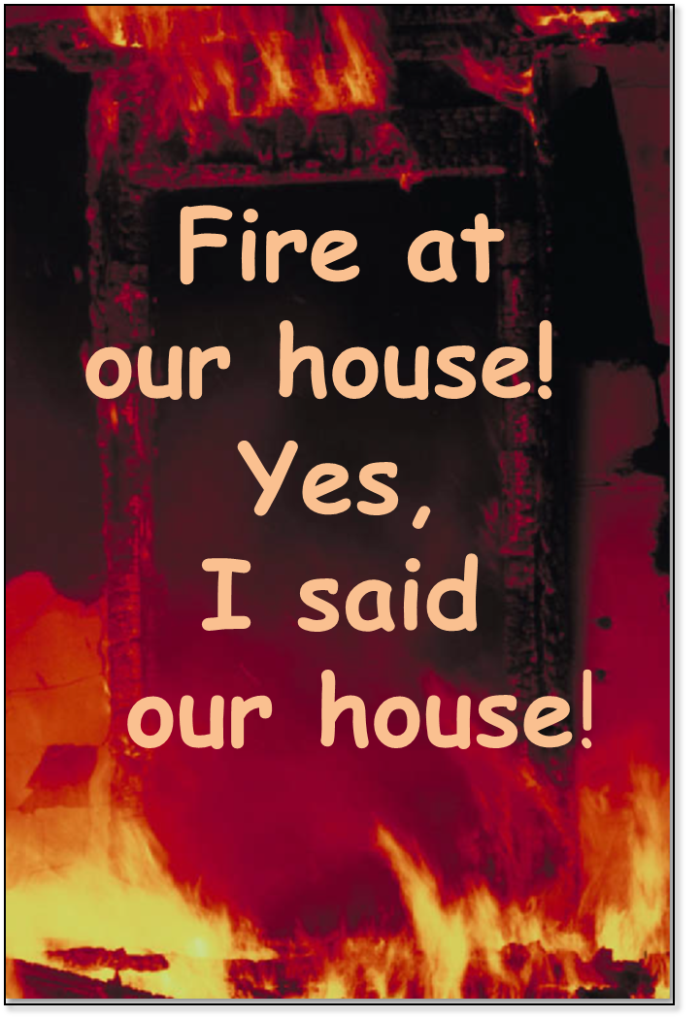 Why is someone knocking at our door early in the morning?

We were both irritated!  My husband got up to check and I said “Be Careful, you just never know who might be trying something weird”  He agreed and went to check.  Well, he never returned.
I jumped up to use the restroom and kept hearing thunder, well I thought it was thunder.  I saw an orange glow outside our bedroom window, but knew that our emergency lights had come on so did not think much of it.
But suddenly,  I thought,

There is a Fire!

I quickly looked out the window and sure enough our shed, that my husband stores supplies in for his business, was in flames.  It was right in plain view out our window.  Wow!  I shrieked to myself and thought I’ve got to get some clothes on and get out of here!
A few minutes later I was in the back yard with the couple who was so urgently knocking at our door.  They had just left a friend’s house and saw the shed on fire.  They were kind and concerned enough to stop and warn us and then call 911.
My husband tried his best to put some of the fire out with his water hose hoping to save some things, but it was no use.  The shed was in flames and the fire was getting hotter and the embers were flying.  He thought about a canoe that was around back and he ran to get it, but too late for fire had caught the end of it and burned  it too.
It wasn’t long before our yard was covered with firetrucks, ambulances, and volunteer firemen.  We were thankful for the quick response and the fire was out in just a few minutes. We and our house were safe. No one was hurt.  How gracious and merciful God was to us.
As I thought about this fire, quite a few Biblical applications started popping in my mind. They are not in any special order, but just as they came to mind.  I think the Lord put all these thoughts in my mind to help me realize that time is short and one day many will be in the eternal lake of fire or in His very own presence.  I hope the latter is true of you.

Applications  in relation to the lost being warned of hell fire

and thou hast delivered my soul from the lowest hell.

Applications for the Christian

James 3:5-6  Even so the tongue is a little member, and boasteth great things. Behold, how  great a matter a little fire kindleth!  And the tongue is a fire, a world of iniquity: so is the tongue among our members, that it defileth the whole body, and setteth on fire the course of nature; and it is set on fire of hell.

Everything happened so quickly, that I never thought to get pictures except for this little video of the firetrucks in our yard.  We are truly grateful for God’s protection.