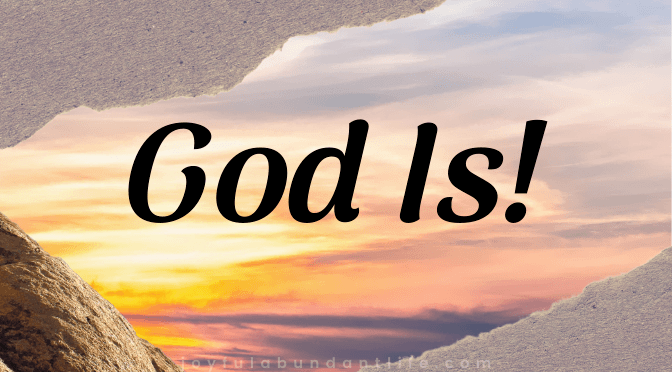 GOD IS – Instilling Biblical Truths Into My Grandchildren

GOD IS! What do you tell your children and/or grandchildren when they ask you about God? One of the first things they should know is that GOD IS! What do you mean God is? God is, was, and always will be. He has no beginning and He has no end. He has always been there and will always be there, hence GOD IS!

The same was in the beginning with God.

All things were made by him; and without him was not any thing made that was made.

How do you answer someone who says, PROVE IT!

Guess what?  I don’t have to prove it.  You have to prove that He isn’t.  God has already proved Himself over and over and there is not one person who is without excuse.

v 19 Because that which may be known of God is manifest in them; for God hath shewed it unto them.

v 20 For the invisible things of him from the creation of the world are clearly seen, being understood by the things that are made, even his eternal power and Godhead; so that they are without excuse:

God has shown Himself to mankind since the beginning of time.  Look around, see God’s creation everywhere.  It is clear that He cannot be denied.  God simply IS!

Psalm 19:1 The heavens declare the glory of God; and the firmament sheweth his handywork.

So who is it that claims God isn’t?  It’s the fool, that’s who!  Anyone who says there is no God is a fool.

Psalm 14:1 The fool hath said in his heart, There is no God. They are corrupt, they have done abominable works, there is none that doeth good.

Psalm 53:1 The fool hath said in his heart, There is no God. Corrupt are they, and have done abominable iniquity: there is none that doeth good.

A fool first says. THERE IS NO GOD.  Because he says this, he thinks there is no sin.  Just do whatever I feel like doing.  There’s no God, so sin doesn’t exist.  That is false for God has written His law on the heart of every man.

Romans 2:15 Which shew the work of the law written in their hearts, their conscience also bearing witness, and their thoughts the mean while accusing or else excusing one another;)
A fool also does not prepare to die.  Do you know the story of the rich man who wanted to build more barns to hold all his stuff?  This was the result:
But God said unto him, Thou fool, this night thy soul shall be required of thee: then whose shall those things be, which thou hast provided? Luke 12:20

Noah looked like a fool to the world, but who were the real fools?  Those that were not prepared to die, those who did not believe!

By faith Noah, being warned of God of things not seen as yet, moved with fear, prepared an ark to the saving of his house; by the which he condemned the world, and became heir of the righteousness which is by faith.

The Prophets of Baal were fools.  They called on their gods over and over but never got an answer. 1 Kings 18

The people at Mars Hill prayed to an unknown God.  Praise the Lord, we can know God and go to Him personally. Acts 17:22-24

Neither is there any creature that is not manifest in his sight: but all things are naked and opened unto the eyes of him with whom we have to do. Hebrews 4:13

Professing themselves to be wise, they became fools. Romans 1:22

DON’T BE A FOOL – GOD IS AND ALWAYS WILL BE!

Here is a series on instilling Biblical Truths into My Grandchildren