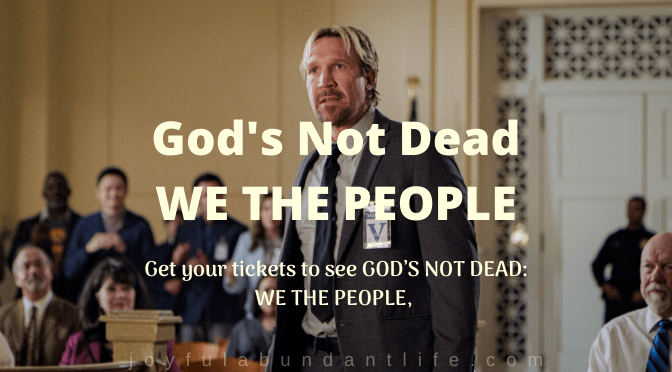 Freedom is a fragile thing and it’s never more than one generation away from extinction and those who have known freedom and lost it have never known it again. -President Ronald Reagan 40th president of the United States from 1981 to 1989

The new film in “The God’s Not Dead” series is here. It is an inspiring movie and well worth watching especially by those in the homeschooling community.

The Pastor, who teaches Bible Class, finds himself defending Christian homeschooling families who have been inspected unannounced by a local government official.  Because this social worker doesn’t like what she sees and hears, she decided that the children are not getting the education that they need.  She sees them as being indoctrinated by Bible-believing parents and leaders.  These families are ordered to put their children in public school within ten days or face exorbitant fines and contempt of court.  Although in unbelief at what just happened, they decide take a stand for what is right.

An invitation to Washington allows them to testify in a congressional hearing that will determine the future of education in our country for years to come.

This film is very true to life for today’s world.  Our freedoms are under attack in so many ways.  Will we, will I, take a stand? I have 21 grandchildren.  They are all in homeschooling families.  I do not want to see their rights stripped from the parents and their children become owned by the state. Taking a stand, may mean taking action.  We (I) must stand for Truth, we must stand for our rights and freedoms in America, and this includes freedom to educate our children at home and in the fear of the Lord. When we lose these rights, we cease to be America.  We are the people!

Take an opportunity to see this film.   It will make you stop and think.  It will be coming to the theaters soon.  Check your area here to see where you can watch it.

Our whole faith started because one man chose a hill He was willing to die on.

This is bigger than just homeschooling.  I think we need to fight this.

That’s part of your plan isn’t it, keep us all divided?  So we don’t realize that you’re really chipping away at our freedoms and liberties.

America is a country so blessed that to whom much is given, much shall be required.

It really brings God into our lives at a time when I don’t think we’ve needed Him more.  – Jeanine Pirro

We are the people!

OF, BY, and FOR the People.  The government is supposed to be for us, not against us.  It seems these days it is going the opposite.  But in reality it is nothing new.  Men has always tried to strive against God.  However,

There is no counsel against the Lord

“The kings of the earth set themselves, and the rulers take counsel together, against the Lord, and against his anointed…

“He that sitteth in the heavens shall laugh: the Lord shall have them in derision.  Then shall he speak unto them in his wrath, and vex them in his sore displeasure.”

If our leaders were wise men, they would heed God’s Word

“Be wise now therefore, O ye kings: be instructed, ye judges of the earth.  Serve the Lord with fear, and rejoice with trembling. Kiss the Son, lest he be angry, and ye perish from the way, when his wrath is kindled but a little. Blessed are all they that put their trust in him.”

Let’s trust Him, stand for Him, and fight for Him.   If God be for us, who can be against?

You can also get them on the official Website

Disclaimer:  I was given a free preview of this movie in exchange for a review.  All opinions are my own.

I HAVE LINKED UP HERE

I loved the first two films. I will have to see this one too! Thanks for bringing it to my attention. Visiting you from the instaencouragements link up.