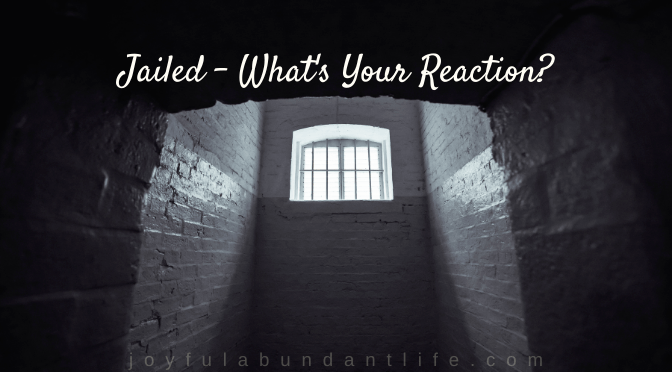 Do you know anyone that has been jailed unworthily?  I do!  Have you ever heard of anyone like that?  Most of us have.

I have a friend that was recently jailed and served her sentence even though she should not have been there, but we don’t always get justice here on earth.

And if you know your Bible, you know that Joseph was unjustly thrown into prison for crimes that he did not commit.

Paul and Silas were also two Christians in the New Testament that were beaten and thrown into jail for what?  They certainly didn’t commit a crime, but instead, other men were jealous because their monetary gains would be lost.  Read the story in Acts 16.

What would your reaction be in you were the one thrown into prison unjustly?  What lessons can we learn from those it has happened to?  Here are a few that I gleaned from the life of Paul and Silas

16 Lessons from Paul and Silas

Evil spirits can follow Christians distracting others and us. They might even speak the Truth.  The devil is good at disguising the Truth. The devils also believe but tremble (Acts 16:16-17)

We should recognize the evil end be grieved. Satan can disguise himself as someone good using it for his own gain. There are many false prophets who speak part truth and disguise it. Satan is a master liar. (Acts 16:18)

Evil is persistent and so should we be in our service for the Lord. God is greater and can overcome any evil.
By the authority of Jesus Christ we can tell these spirits to leave so as not to hinder our ministry or the souls of those who might come to salvation. (Acts 16:18)

Doing right may cause persecution.(Acts 16:19-21) (Check out a modern day example.  Look up Pastor Coates grace Life Church in Canada)

Doing right may cause a multitude to rise up against us.(Acts 16:22)  We have hindered the agenda of the evil.  Many lies may be told about us.

Doing right may lead to our imprisonment. (Acts 16:23)

Perhaps the guards were even paid extra so they spread lies and made sure they were kept fast in prison (Acts 16:24)

I should return good for evil. I can sing even while under persecution. I need to be a testimony always under all circumstances, whether to prisoners, to guards, or to those without who are watching for the outcome.(Acts 16:25)

Righteousness will always prevail and God’s ways and timing are always best. We may want immediate deliverance from God but He always has the best plan (Acts 16:26)

Other Lives maybe saved. Because Paul and Silas were not concerned about saving their own lives it saved other lives. (Acts 16:27-28)

The jailer called for a light and Paul and Silas had The Light to show him the way of Salvation. Jesus is the light of the world.(Acts 16:29)

The jailer trembled because he recognized he was a sinner before almighty God and needed to be saved.(Acts 16:29-30)

If you believe and anyone in your household believes you will be saved. (Acts 16:31)

Immediately the jailer became a new person. He listened eagerly to Gods Word, he cared for the wounds of the prisoners, he wanted them in his own house and wanted all his household to hear, he was not concerned about what others thought, his new heart rejoiced for their new found faith in God(Acts 16:32-34)

Though the prisoners were told they could go free they would not until it was known to others. Another testimony to those without perhaps bringing another soul to the Truth.(Acts 16:35-39)

During and after trials we need the fellowship and encouragement of other believers.(Acts 16:40) So why not

These are places I’ve linked to