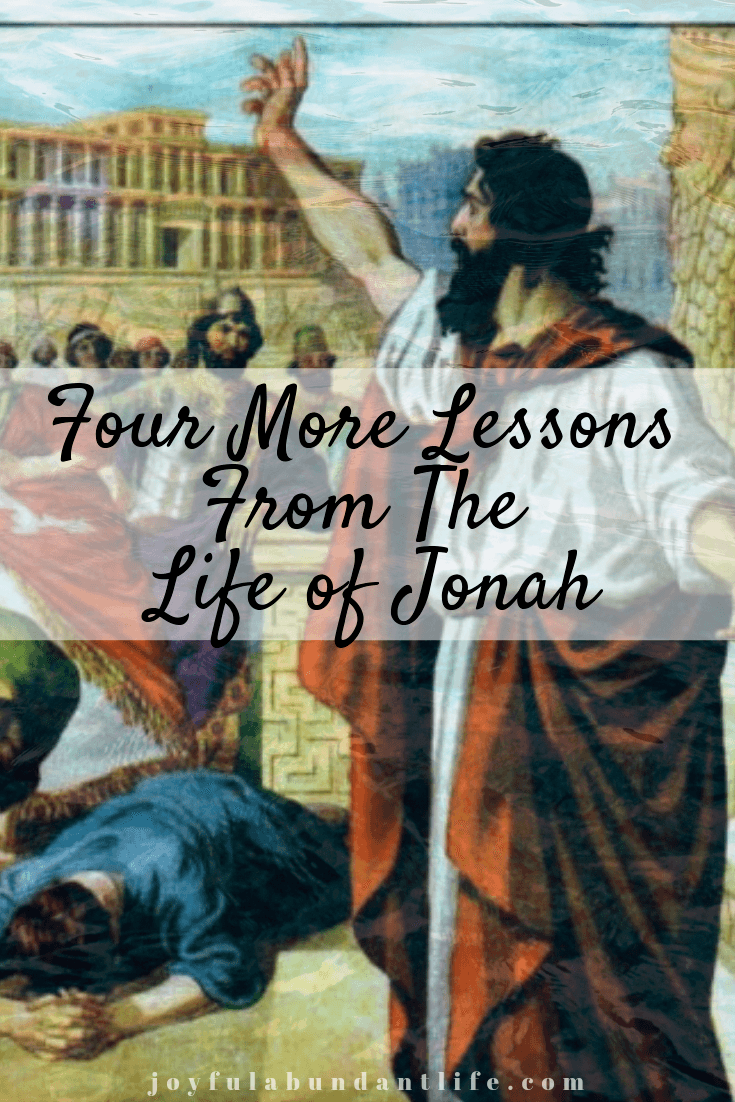 Four More Lessons from the Life of Jonah

The lessons we learn from the life of Jonah are many. What lessons have you learned?

Jonah 3:1  And the word of the LORD came unto Jonah the second time, saying,

1. I wonder if Jonah would have received more than 2 chances.  God gives me chances over and over!  Oh how great is His mercy!  What if He gave me only that second chance?  Where would I be?

Lesson Learned: My God is ever merciful, forgiving, loving, longsuffering.  I should never presume upon His mercy, but instead should be willing to obey His commands the first time.

Jonah 3:2  Arise, go unto Nineveh, that great city, and preach unto it the preaching that I bid thee.

Lesson Learned: If I don’t know God’s Word, what are the chances that I will obey?  I need to make God’s Word a daily part of my life so that I continually get to know Him better.  In doing so I will be more apt to obey Him.

Jonah 3:3-4  So Jonah arose, and went unto Nineveh, according to the word of the LORD. Now Nineveh was an exceeding great city of three days’ journey.  And Jonah began to enter into the city a day’s journey, and he cried, and said, Yet forty days, and Nineveh shall be overthrown.

3. Jonah decided to become wholehearted about his job.  Once He was willing to obey, he did not waste time.

Lesson Learned: The Bible says to be wholehearted about serving God.  Wholeheartedness would include using my time wisely in a way that is pleasing to God.   Perhaps I can get that task that God has given me done quicker and better if I obey right away rather than thinking it over and trying to decide if I want to do it.

Jonah 3:5-8  So the people of Nineveh believed God, and proclaimed a fast, and put on sackcloth, from the greatest of them even to the least of them. For word came unto the king of Nineveh, and he arose from his throne, and he laid his robe from him, and covered him with sackcloth, and sat in ashes. And he caused it to be proclaimed and published through Nineveh by the decree of the king and his nobles, saying, Let neither man nor beast, herd nor flock, taste any thing: let them not feed, nor drink water:   But let man and beast be covered with sackcloth, and cry mightily unto God: yea, let them turn every one from his evil way, and from the violence that is in their hands.

4.  Jonah’s Obedience brought results.  He proclaimed God’s Word and the king and people of Nineveh believed and repented.