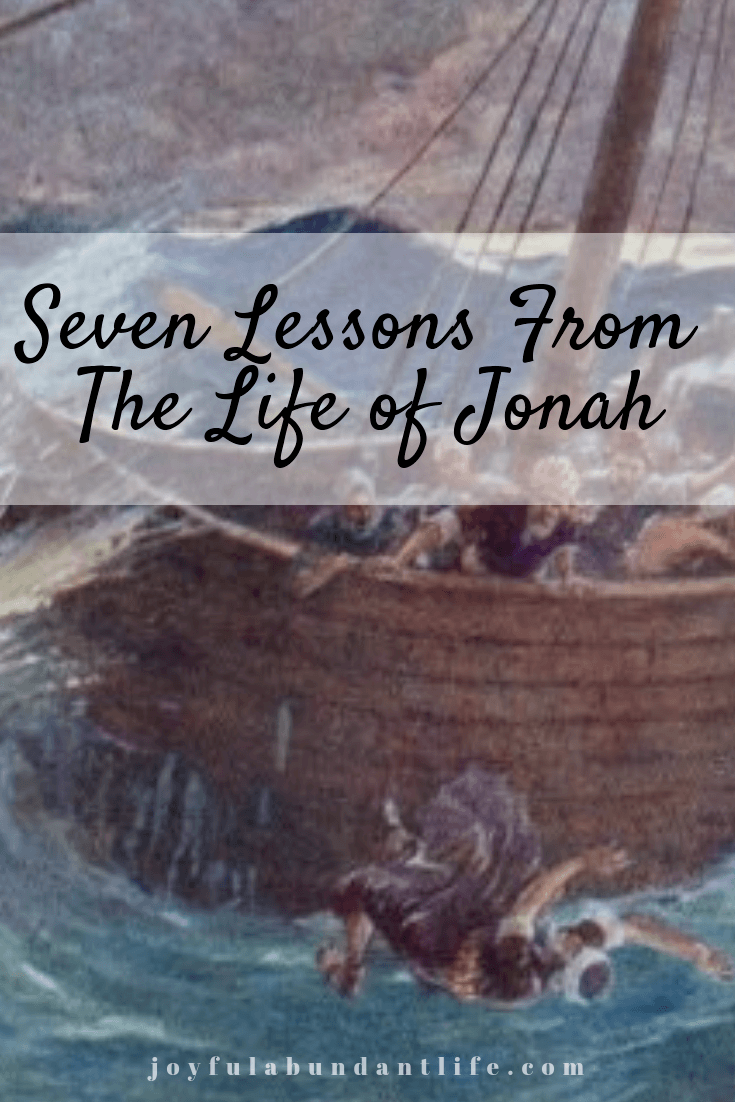 Seven Lessons from the Life of Jonah

There are so many lessons from the Life of Jonah.  Here are seven of them.

1. Jonah rose up to flee from God’s presence.  First of all, he rose up to flee! When I rise up in the morning, do I flee from the presence of the Lord?  Or do I rise up and run into His arms asking Him to show me His way and teach me His paths?

Sometimes I must live a sad Christian life.  I start my morning in God’s Word and have a blessed time with Him and then get so busy that I “flee from His presence” and what He has told me to do.  I am grateful that His mercies are new every morning!

Lesson learned:  Stay in God’s presence.  There you will have protection and perfect leading from Him.

2.  Jonah paid a fare to leave God’s presence and ultimately paid a price for his sin.

Lesson learned:  No price is worth getting out of the presence or will of God!  There is no satisfaction, no protection, no peace outside of His will.  Jonah went down into the ship.  Leaving God’s presence always makes us go down into a backslidden condition.

Jonah 1:4-5  But the LORD sent out a great wind into the sea, and there was a mighty tempest in the sea, so that the ship was like to be broken.   Then the mariners were afraid, and cried every man unto his god, and cast forth the wares that were in the ship into the sea, to lighten it of them. But Jonah was gone down into the sides of the ship; and he lay, and was fast asleep.

3.  Punishment/Judgment will come to God’s children for their disobedience.  Most likely that judgment will also affect others. The mariners were afraid of the storm that had now arisen.

Lesson learned:  I may cause others to come under the judgment of God because of my disobedience.

4.  Jonah was fast asleep during the storm.  Am I asleep sometimes to the fact that God is chastising me because I stepped out of His will?   Lesson learned:  Stay alert.  Pay attention to what God is trying to teach you.  Remember that He chastises His children out of love.

Jonah 1:9-10  And he said unto them, I am an Hebrew; and I fear the LORD, the God of heaven, which hath made the sea and the dry land.  Then were the men exceedingly afraid, and said unto him, Why hast thou done this? For the men knew that he fled from the presence of the LORD, because he had told them.

5.  Jonah was blamed for the fierce storm – He was asked, Why hast thou done this?  God is often blamed for natural disasters, but could it be true that they sometimes come about as a result of the disobedience of Christians.  Yes, God does punish wickedness, but He chastises His children too.

Lesson learned: When I disobey the Lord it may mean that I will become the cause of a tragic event or even a natural disaster which in turn could harm many others.  God in His mercy spared the lives of these sailors, but that may not always be the case.

Jonah 1:16  Then the men feared the LORD exceedingly, and offered a sacrifice unto the LORD, and made vows.

6.  Men may see God’s work and in turn glorify Him, fear Him, give Him offerings, and make promises to Him.  Often those promises are forgotten or never kept. But sometimes souls are brought to Christ through these events.

Lesson learned:  When I find myself in trouble and in turn make a promise to God if He delivers me,  I need to make sure that I keep that promise.

Jonah 1:17  Now the LORD had prepared a great fish to swallow up Jonah. And Jonah was in the belly of the fish three days and three nights.

7.  God is merciful.  More than likely He spares our lives over and over.

Lesson Learned:  When I see God’s mercy upon my life, I need to be grateful.  He may have spared my life or caused an incident to happen in my life that I did not especially like, but it caused me to look to Him and yield to His Word.

GOD is good all the time