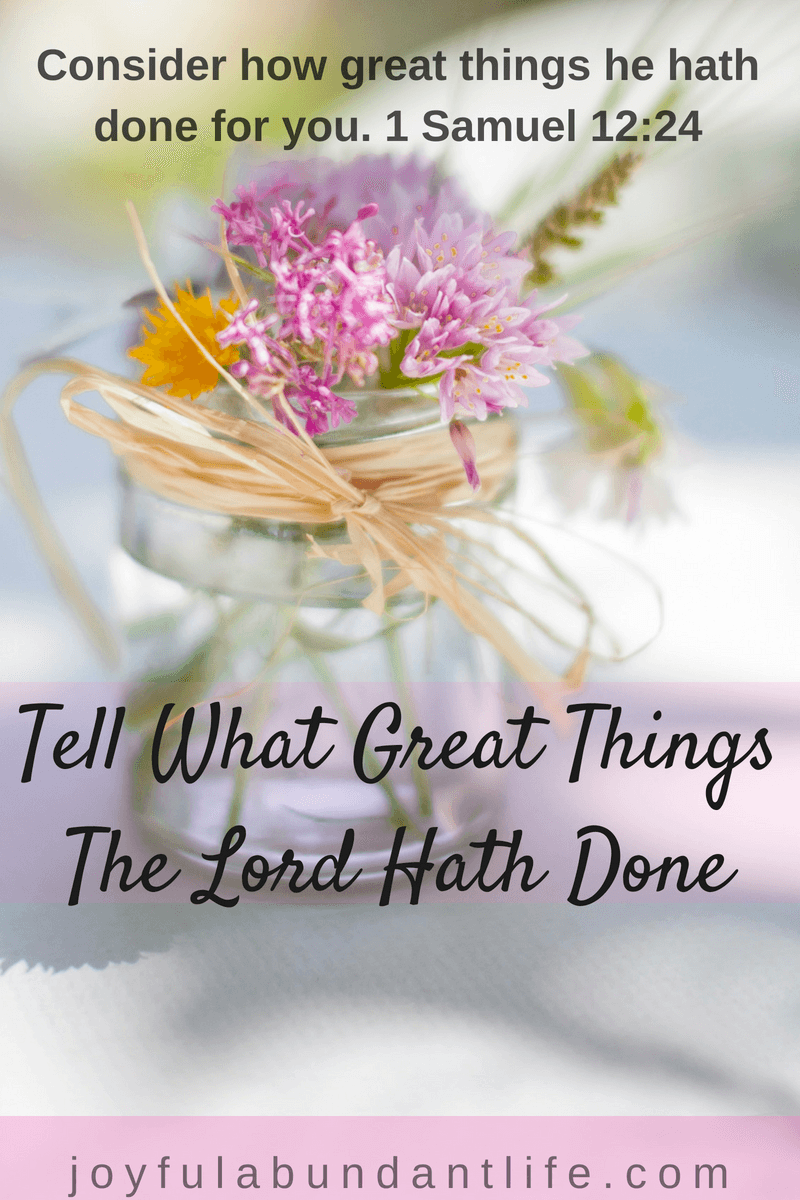 The following true story took place a few years ago.  It’s a story that surely tells what great things the Lord hath done!
There was a certain man who lived down the street from my son.  He fixed lawnmowers and sold used lawnmowers.

There was another certain man who lived near my son.  He also was a fix it man for lawnmowers.  They all knew each other.

One of these men who was getting old, also got very sick, was in the hospital and near death.  My son sat with him several days and nights.  He did not have a very good family and many of them  hated him and each other.

Although the man could not speak much while in the hospital he did respond to my son through facial gestures and hand squeezes.  My son feels confident that he came to know the Lord as his Savior while on his death bed.

After he died my son was asked to preach his funeral.  My son’s caring attitude for this man and for his family was a great testimony to those who attended his funeral.

The other certain man said “I want to come to church with you”.  Well, today, while my son was out of town this certain man, his daughter and her “husband” showed up at church.  The “husband” had accepted the Lord Jesus as his Savior a week ago through our jail ministry.

He had been in and out of jail for different reasons and it just happened that one of our men from church happened to witness to him in the jail.  He told his father-in-law, the other certain man, that he was going to church.  The other certain man said he was going to church too, but wanted to go to my son’s church.  They had no idea that it was the same church until they showed up there!

Amazing things God does for His Glory

Now isn’t that a wonderful story!  And isn’t it great how the Lord worked it all out!  After church they went out to dinner with us and another family from the church.  We left the restaurant a little earlier than the others and a while later received a phone call from the other family saying that the daughter had also accepted the Lord as her Savior.  Wow!  What an exciting day and in what unusual ways the Lord works!  Let’s tell what great things the Lord has done!

“But he that glorieth, let him glory in the Lord.” (2Co 10:17)“But let him that glorieth glory in this, that he understandeth and knoweth me, that I [am] the LORD which exercise lovingkindness, judgment, and righteousness, in the earth: for in these [things] I delight, saith the LORD.” (Jer 9:24)

I would love to have you join me and others for more Biblical Encouragement.

New Movie – I HEARD THE BELLS