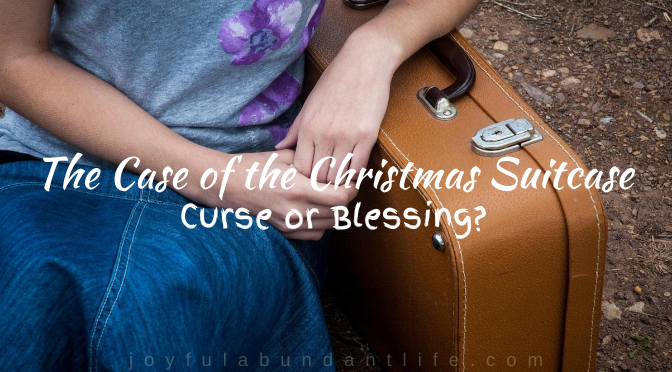 The Case of the Christmas Suitcase–Curse or Blessing?

It was time for three Brazilian students and friends who are attended College nearby to fly home for Christmas.  They so graciously consented to taking another loaded suitcase, full of Christmas presents and other items, to our son and daughter-in-law who are missionaries in Brazil.

It was nearly 5 pm and I had been thinking about them throughout the day and praying for a safe flight and for the extra suitcase to get there without any problems going through customs.

A text came through on my phone which said, PRAY – they will not let us check the suitcase – embargo in Brasilia.  Oh me.  I called and texted everyone I could and asked them to pray.

We heard from them again – no, they could not take the suitcase.  Someone needed to pick it up right away.  Well, we live over an hour away from the airport and they were supposed to board their plane in an hour!

My husband jumped in the car and took off, but to no avail.  It was 5:00 and although we live in a small town, traffic still does get bad at 5:00.  So he is stuck and they are stuck.

After talking again, it was decided that the suitcase would be left in an inconspicuous place where he could perhaps find it when he gets there.  But you all know that is a NO NO in this day when you are flying.  The security guard saw that the suitcase was being left and warned that if they left it they would come after them.

My husband was called again and asked, don’t you know of anyone in Charlotte that could pick up the suitcase?

Time was running out

There are affiliate links associated with this post – full disclosure here

The lines were long and they needed to board.  We did know a family in Charlotte, but they didn’t exactly live close to the airport.  My husband called them anyway and asked, what are you up to?  Answer:  I am going to visit someone near the airport     Can you believe it?  The Lord had already taken care of this for us.  In ten minutes he was at the airport and had our suitcase in his back seat.  This was our answer to prayer.

Well, we were disappointed that the suitcase was not able to make it to Brazil,  but we were quite surprised that our three friends managed to clean a ton of stuff out of the suitcase and cram it into their carry-ons.  They arrived safely in Brazil and delivered the items to my son.  My son was naming the items to me that he received out of the suitcase as I followed along a list I had made of all the items.  It was unbelievable!  I kept asking him,  you got that?  and you got that?  I never would have dreamed that they could have fit that much extra “stuff” in their suitcases.

God is so good

This turned out to be a blessing in that we did not have to pay for the extra suitcase and they were still able to get many of their Christmas presents.  The other items were in safe hands until we can make arrangements to pick it up.

How very grateful we are to our friends who worked hard at “saving” our stuff.  It was a whole lot of extra stress on them, yet they were as concerned about us and they were about getting themselves on the plane and safely home.  How blessed we are!

God is so good and merciful!

We don’t know why God allowed it to be this way,  but He knows what is best.  He took care of everyone, blessed us with wonderful, giving friends,  and even cared about all the little material things that we were trying to get to our loved ones.

Hudson Taylor: Saved By a Tract

How Would You Respond If You Were Suddenly Paralyzed From The Neck Down? Would You Still Consider God As Loving Tender And Powerful?