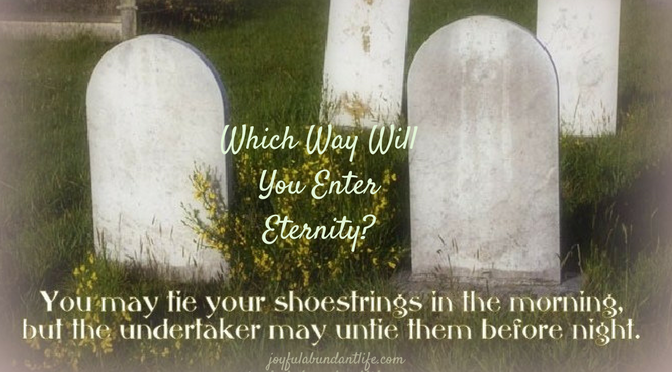 Which Way Will You Enter Eternity?

Where are you going to be in the morning or in the next five minutes? None of us know the answer to that for sure. We may have plans, but the Lord may have other plans.

You may tie your shoestrings in the morning, but the undertaker may untie them before night.  Which way are you going to enter eternity? 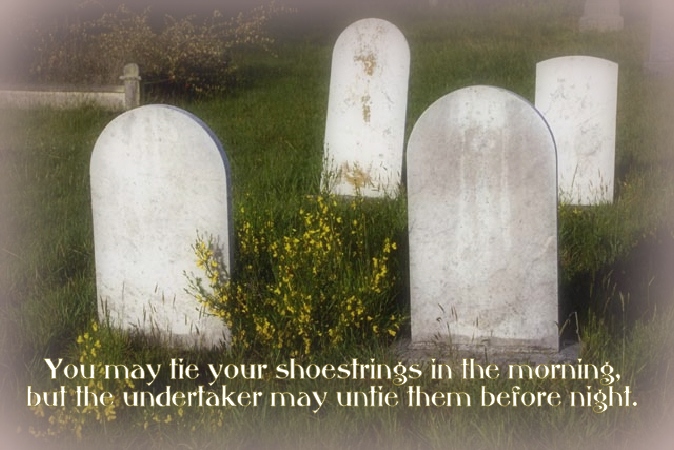 Did you ever think as the hearse goes by,
That “It is appointed unto men once to die”?
When your time comes, where will you be
To spend your never-ending eternity?
Here you may work, buy, borrow, and save,
But lose it all when you go to the grave.
Money or good works a dead man’s hand cannot hold,
Nor can it purchase salvation untold.
Life everlasting God will freely give,
You may have it now; trust Christ and live!
~copied

Which way will you be ready for eternity? There is only one way to heaven, but there are two ways into eternity – saved or lost.

What if you knew you were going to die today or what if the Dr. gave you a month to live? Are you ready to die? Here is a story of a man in prison who was sentenced to death. He knew he was going to die.

Do you have Hope or Fear?

A man went to visit a prisoner in jail and was puzzled by the prisoner’s happy face until he told him the following story:

Three years ago I was condemned to death for murder. You can imagine that my cell became a little hell. The thought of approaching death tortured me day and night. Only a few more weeks and I should be in eternity. I could neither eat nor sleep, so I decided to make a rope from my torn bed sheets with which to hang myself. Only the fear of eternity held me back as suicide would hasten my arrival there. One day I found a gospel tract which had been placed on my table. I scanned through the contents which I considered to be nonsense and threw it into the corner. Later, however, I picked it up again and read it through. Thinking over it I paced up and down in my cell, longing to be delivered from this fear. In the leaflet stood the words, “The Son of man is come to seek and to save that which was lost” (Luke 10:10). Lost! yes, surely, I was lost. But how could I be saved? How could I get rid of the heavy burden? I managed to get hold of a Bible and began to read it, still filled with this strange feeling swaying between hope and fear. Then I found the words, “The blood of Jesus Christ, God’s Son cleanseth us from all sin” (I John 1:7). Was that really possible? I fell on my knees and confessed my sins to God, and found forgiveness and peace. Later my death penalty was changed to life imprisonment, but I knew I had been given eternal life through Jesus Christ (Rom.6:23).

Here is a story in the Bible of a man that was almost persuaded to be saved. 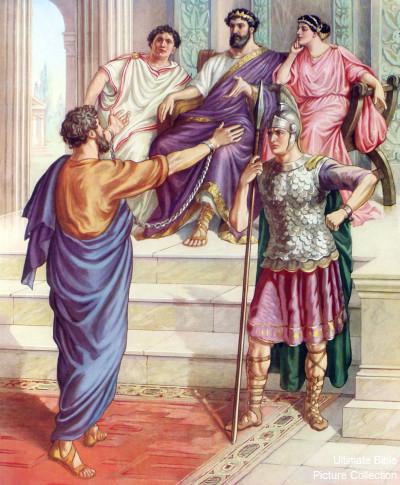 Paul stands before King Agrippa. He is ALMOST persuaded to be a Christian, but almost does not count!

Paul had been in prison for more than two years. Many spoke false things against Paul, but they could prove none of them. Festus, the governor asked Paul if he was willing to go up to Jerusalem and be judged concerning the things of which he was accused.

Paul requested to be sent to Caesar and being a Roman citizen, he had that right so Festus granted his request.
About this time some distinguished visitors came to Caesarea to see the new Governor. They were Agrippa, the governor of the country east of the Jordan River, and Bernice, his sister. This Agrippa was sometimes called a king. During their visit Festus told them about Paul. He told them that the Jews were accusing him of breaking their religious laws and that in his trial before the Jews, Paul had spoken earnestly about one named Jesus, who had risen from the grave.

On the next day Agrippa and Bernice entered the judgment-hall with Festus. Then Festus gave command and Paul was brought.

Festus rose to introduce this prisoner to the King. He said, “Before you stands this man whom the multitude of Jews in Jerusalem have declared is not fit to live any longer. But when I found that he had done nothing deserving of death, and when he had expressed his wish to be taken before Caesar, in Rome, I determined to send him there to be judged. Now, however, I have no charge to make against him, therefore I have brought him before you people and especially before you, King Agrippa, that you may hear him and know for what purpose he is being held in bonds.”

Agrippa now spoke, and said to Paul, “You are permitted to tell your own story before us.”

Paul rose up, stretched out his hand on which hung the heavy chain, and said: “I am glad, O King, that I may speak for myself today before you, and tell why I am accused by the Jews. I know that you understand the customs and questions which are among the Jews, and you will understand my words.

Paul told Agrippa of his past life and how he persecuted those who believed in Jesus and put many of them in prison. He told the story of his trip to Damascus where he was going to persecute Christians.

I was on my way to Damascus to persecute the Christians there when I saw a vision from God. It was at midday, O King, when suddenly I saw on the road a light from heaven, more dazzling than the noonday sun, and the brightness of it frightened me and my companions. We fell to the ground, then a voice spoke to me in the Hebrew language, saying, ‘Saul! Saul! why are you persecuting me?’ I cried, ‘Who are you, Lord?’ and the voice replied, ‘I am Jesus, whom you are persecuting.’ That voice commanded me to stand on my feet while I received Jesus’ orders. And that voice told me I should tell of Jesus, not only to the Jews, but to the Gentiles as well.

“Because I have obeyed the command I received in that heavenly vision, O King, I am now being persecuted by the Jews who will not believe in Jesus. Again and again they have sought to kill me, but God has thus far delivered me from them, and he has given me strength to tell to all who come to me that Jesus is indeed the Christ of whom Moses and the prophets wrote.”

Festus thought that Paul must be crazy and called out, Paul, much learning makes you mad.

But Paul answered calmly, “I am not crazy, most noble Festus, but am speaking words of truth and soberness. King Agrippa knows these things of which I speak, therefore I talk freely to him.” Then, turning to Agrippa, Paul said, “King Agrippa, do you believe the prophets? I know that you believe.”

Agrippa answered, “Almost you persuade me to be a Christian.”

Paul replied, “I would to God that not only you but all who hear me today were such as I am except for this chain.”

But the King was not ready to humble his proud heart and become a Christian. He rose up at once and went aside with Bernice and Festus and others to discuss Paul’s case.

The Bible says:
“It is appointed unto men once to die, but after this the judgment” (Hebrews 9:27).

“These shall go away into everlasting punishment: but the righteous into life eternal” (Matthew 25:46).

“For the wages of sin is death; but the gift of God is eternal life through Jesus Christ our Lord” (Romans 6:23).

Have you ever considered the future of your eternal soul? We are all on our way to eternity. As sinners we are deserving of eternal judgment in hell. But God, in His infinite love and grace, has provided the way of salvation through Jesus Christ, His only Son, who died for our sins and rose again. Trust Him today, and pass “from death unto life.”

Don’t be like Agrippa who was almost persuaded for almost may turn into too late.

You don’t have to be like Agrippa – almost, or so close, but too proud or too attached to other things that you won’t get saved. You can be saved to day. It is a free gift. You cannot earn it.

When it comes to eternity, TAKE THE GIFT! 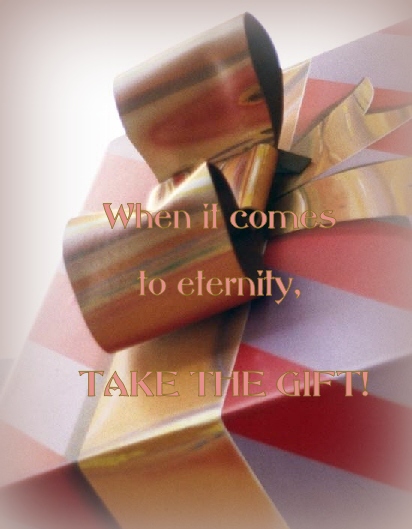 The good news is, “The GIFT of God is eternal life through Jesus Christ our Lord” (Romans 6:23). Jesus paid for this wonderful GIFT when He died on the cross as our substitute. Turn to Him in repentance and accept this free GIFT today!

Maybe there was a time when you trusted Christ, or thought you did, but sometimes you have doubts. Listen to this story.

Some years ago I had occasion to speak with a lady who was traveling beside me, “Kindly allow me to ask you a question: Do you have everlasting life?”

Her reply was, “I hope so.” I told her that if she had everlasting life, she should know it.

I continued, “Allow me to ask you another question: Do you know by faith the Lord Jesus Christ as your Savior? She earnestly said that she surely did, so I called her attention to John 6:47: “He that believeth on Me hath everlasting life.” I said, “Let’s go over it again,” and repeated the verse, pausing after “hath …”

“These things have I written unto you that believe on the name of the Son of God; that ye may know that ye have eternal life” (1 John 5:13).
–John G. Boate

If you are a Christian, how are you living? Would you be ready for Jesus to come today? Are you ready to stand before Him and give account for your life?

Illusions – Do You Know The Difference Between What Is Real And What Is Not?

Death is Beautiful in God’s Eyes