Would you consider abortion in the following situations?

As a young girl, I never would have thought that our country would be where it is now in regard to abortion.  There are some interesting stories out there of how God worked and saved many from that tragedy.  How about these situations?

Would you consider an abortion in the following four situations?

How about this one?

Here is a Mom and Dad.  They have one girl, who is 18 months.  Mom is pregnant again.  Mom and Dad’s relationship has not been the greatest and Dad is not happy about the pregnancy.  There’s a good chance that this child won’t even have a dad or a very good home.  Should the child be aborted?  Well, dad thought so.   He forced mom to take a pill to abort the baby.  Mom got very very sick and had terrible crampsand was sure the pregnancy would end.

But God had other plans.

We don’t know why God places certain people in these circumstances, but He ultimately has a purpose.  The pregnancy did not end and another baby girl was born into this family.  The Dad did not stay with mom long and he left Mom with two baby girls to care for on her own.  That is not the end of the story.

This baby girl who should have been aborted grew up and married a preacher.  She has been a godly example to many ladies and has raised three godly daughters of her own.  She is not just some person that I read about in a book.  She is a friend of mine and has been a great influence in my own life as well.  God had a plan for her as He does for all of us!

January is Sanctity of Life Month:

Sanctity of Human Life Sunday is held on the closest Sunday to the anniversary of the Jan. 22, 1973 decision by the U.S. Supreme Court to legalize abortion in the Roe V. Wade case.

Check the US Abortion Clock and see what the abortion statistics are.  It really is amazing and unbelievable! 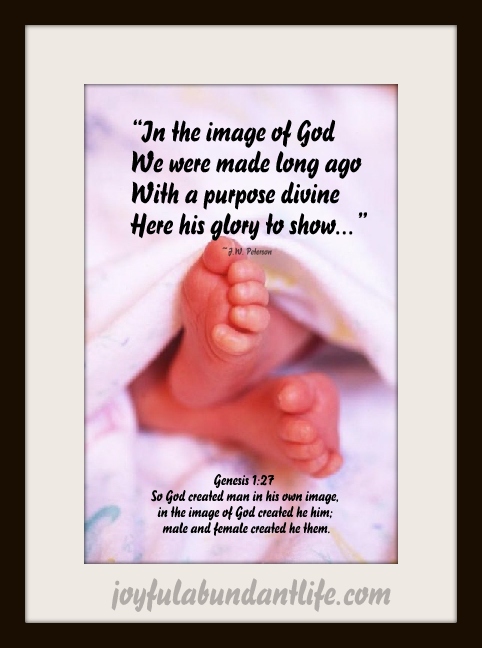 Here are a few quick facts regarding life.  We are made in God’s image and surely life is precious in God’s sight.  May we use ours for His glory!

LIFEMARK Movie and Review and Giveaway!

The Souls of Hindered Children Cry for Judgment to be Passed